I have not blogged in about 3 weeks, which is a lot for me, & actually the last time I wrote an update it was more of a comedic break from cabin fever vs a real update.

It turns out in addition to the insane amounts of snow this month, following last month's polar vortex, we were also dealing with some nasty colds circulating through our own house-- including one turned bronchitis (that would be me).

So Hayden was in school on February 6th (although it was not even a full day because of a delayed opening)... then he was out sick on the 7th, & following 10+ more days of sickness, snow, & a couple days of February Recess... he finally returned on the 19th. It was a short week as-is & last Friday capped it off with another unexpected early dismissal. (That day however was due to a roof leak at the upper elementary school, which meant a dismissal for both schools, because of bus schedules. Awesome, right?)

Today was therefore the first day of hopefully his first full week back at school, since the beginning of the month! Also, the Second Marking Period Progress Report arrived in the mail today... but I'll get to that in a second.

During last week's (barely) 3-day week, lots of papers were sent home because teachers were playing catch-up. Among the papers there was a flyer for the 1st & 2nd Grade Concert Cover Contest. The cover is for the program of their upcoming Spring Concert, & Hayden's (entry) was tucked in the "Keep at Home" side of his folder.

The first thing I noticed was that he did a really great job making his H's in the designated drawing space.

The second thing I noticed was that it said to return to the art teacher... on a date that has not yet passed.

So it was then that I realized Hayden's drawing of H's would not be in the running for the winning cover, because otherwise they would not have sent it home.

I wrote a note to the teacher in our communication journal which read, "Hayden did a nice job writing his H's on the sheet from Mrs. S for the Cover Contest for the concert. Did he also submit one in school? I know it would not be chosen but it's nice for him to participate. :) "

She replied, "The cover that was sent home was the one he was to complete & send back in."

Therefore the answer to my question would be "No", because I have the only contest flyer that Hayden drew on.

The logistical side of me obviously understands that the teachers would not very well choose a program cover that looks like this: 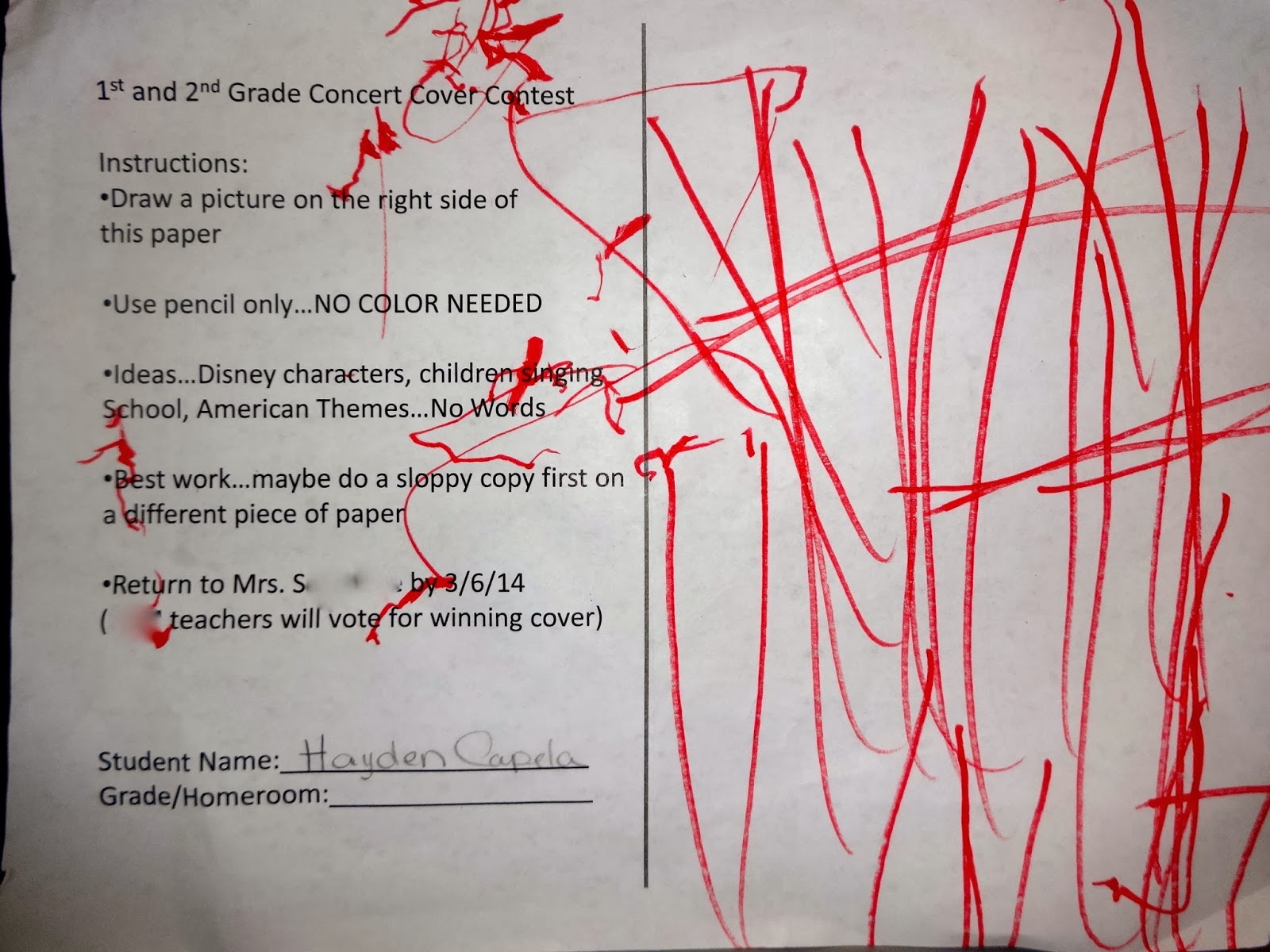 Furthermore, other people would certainly not understand it out of context. They would never recognize that he made controlled, straight lines & even tried to elongate them & condense them to appropriately fit within the space.

Such an odd cover would need a footnote at the very least. And what could they possibly put that would be fair, anyway? "Abstract H's by Hayden Capela"? Would they put the name of his Special Ed teacher or the name of his Gen Ed teacher? Both? Wouldn't the other students who drew recognizable designs be confused & possibly bothered that these random lines were chosen over their well-thought entry? Or what if, even worse, he would get made fun of for having his name attached to this visual?

But the Parent, Protector, & Advocate in me can not dismiss the fact that his entry is still his. Those are his H's & that's what he knows how to make.

Maybe I was just bothered because it felt like a little slap in the face... it was another little reminder that there is actually a difference between a participant & participating.

But as I started to say earlier, his Progress Report also arrived in the mail today. On page 15-- (yes it's long, including input from several therapy areas & two classroom teachers)-- but on page 15 is Social Studies. Long term goals include principles of American democracy, etc... but a short-term objective is "Exploring basic concepts of diversity, tolerance, fairness, & respect for others".

Part of the comments section says, "Hayden is doing well.... He is always offering answers to questions about stories we read that pertain to these concepts. He also offers solutions for the conflicts in our stories when they deal with social topics such as teasing, leaving friends out, sharing, etc. Keep up the great work!"

My kid may not be the one carrying the title for the Spring Concert Program Cover Contest Winner... but I will proudly brag that he accepts diversity... he demonstrates tolerance... he understands fairness... & he will respect others.

But he is intuitive.
He is also kind & he is empathetic.
More importantly, for someone who does not communicate in writing & is still developing his verbal communication skills-- with incredible progress I might add-- he sure can get his point across regardless.

Here he is when he finally stood with his classmates (following rounds of anxiety) at last year's concert... & actually clapping to another student ... giving attention to a sweet little girl who doesn't necessarily "fit" typical standards either.

In the interim I've realized the would-be black & white cover can still be a cover elsewhere... ;)

Most people will not understand my latest Facebook cover photo, but does it matter? I totally get it. 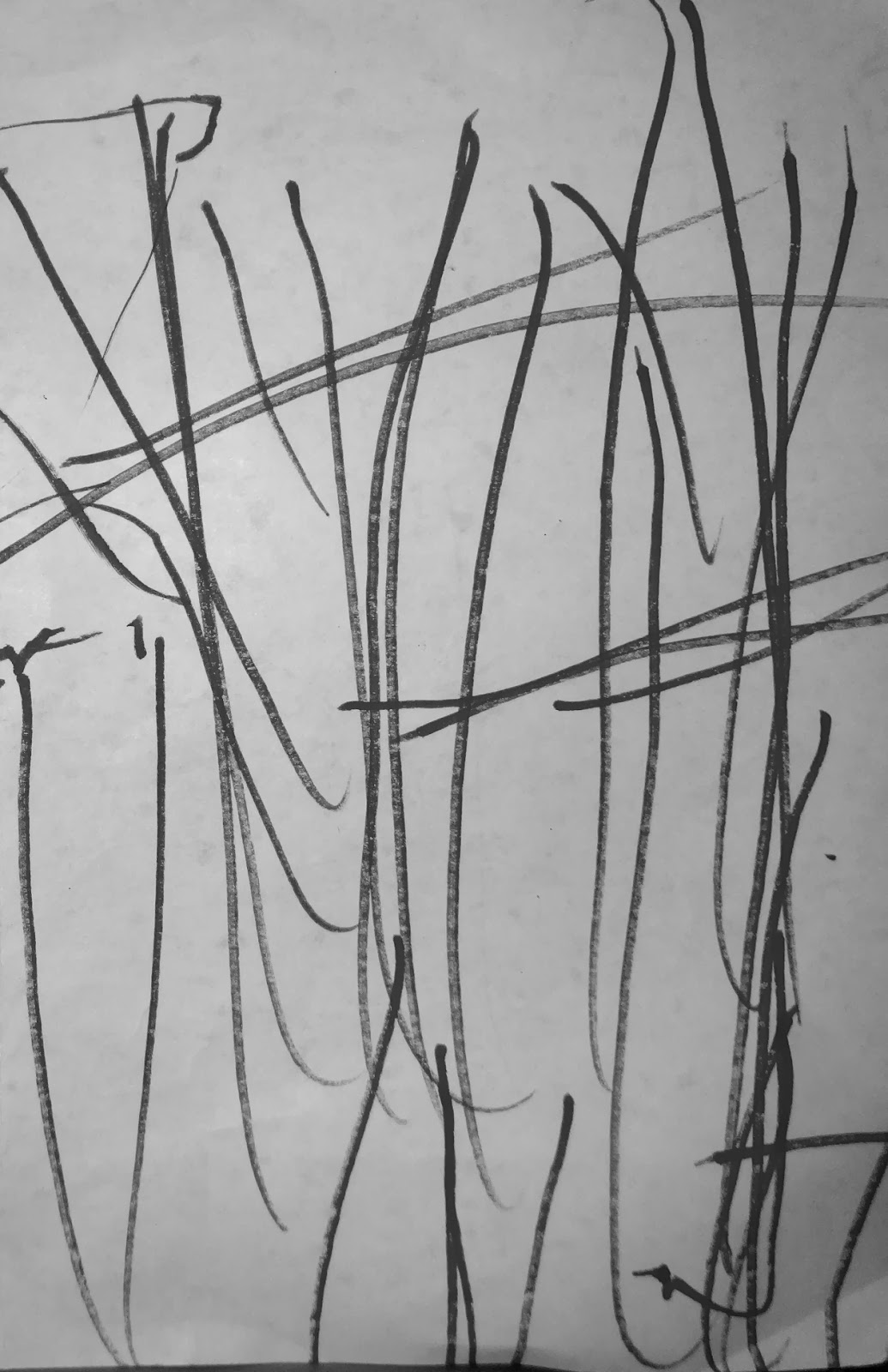 the evolution of a snow day

The thing is when H was a baby & through his toddler years, I was often jealous of a babysitter, therapist, daycare teacher, or really anyone who spent time with my kid during the week (while I was at work). I think especially as a first-time parent, it's also difficult to see the logic in paying someone to take care of your precious offspring only because you are still in the fairytale phase of parenthood.

In other words, you only view interactions with your child as a privilege. In your mind people should be so lucky to do any daily activity with your kid-- whether playing with them or wiping their ass. Right? It's your kid laughing at that toy & you're not there to witness it. It's your kid who successfully produced a normal, bodily function & you are missing out on another fragment of their development... you're proud of that shit (pun intended) because it means they ate well & they're thriving. Whatever happens during the day, you're missing it, because you're at work. And every time you look at the computer with your wallpaper pic of this golden child, & you see their innocent face staring back at you.... you can barely smile without your eyes welling up. You miss them so.

And don't even get me started on nap time... ugh... that used to break my heart. How is it fair that someone else was with him. I wanted to be the first face he saw when he opened his eyes-- every day, any time of day. Pick him up... hold him... feel the warmth radiating off of him when he just woke up... & breathe in the smell of his sweet skin... especially the one side of his face damp from sleep-sweat... oh gosh... just beyond delicious.

Our babies... our precious little ones. Whether we have one to love or many to love... they're ours to love.

--
Well, one day, about 5 years later when they're in grade school & it's winter time in February, & you are home during a snow storm for the 50th time that calendar year-- (never mind the fact that it's less than 40 days into the new year, because somehow you're certain you've been home for 50 days--) & finally night falls, which means you're >this much< closer to the morning, & therefore >this much< closer to sending your kid off to school for the day... finally...

When the phone rings.

Before we discuss who is calling, let's put this in perspective. Because that fairytale phase of parenthood was sometime in your former life. You might still be happy when your kid is playing, but more so if they're doing well at it on their own. And don't even get me started on nap time... it still breaks your heart but now more so because you are desperate for a window of peace & quiet. To make matters worse, somewhere along the way their sweat turned from sweet to swampy.

So back to the present. It's feeling like day 50 of being snowed in, but finally the light is at the end of the tunnel because your child is only hours away from returning to school, & your phone rings. A very annoying, automated, female voice dictates an introduction that you know by heart-- yet you can not bypass-- & it takes her an eternity to explain that blah blah school district will be on a 2-hour delay & she will speak tomorrow's date in the longest, most drawn-out formal way humanly possible... including the day of the week, month of the year, date of the month, & eventually conclude with "two thousand and fourteen"... but wait... you still can not hang up, because you actually have to press 1 to hear the message. You still have not heard the damn message.

And you realize you would pay double-- heck, triple-- for a babysitter, therapist, daycare teacher, or really anyone who's not currently in jail... to spend just one day with your kid so you can leave your house, drive to work, sit at your desk, stare at the computer... which has a wallpaper pic of your precious offspring, & you see their innocent face staring back at you... you can barely smile without your eyes welling up. Because you are THANKFUL.

You have HOURS until you need to tend to their needs. And until then, this is YOUR time.