Some of our friends and family got an email from us several weeks ago, which spilled the beans about what I quietly started several months ago...
The message read in part:

"Dan & I wanted to send a note ahead of Hayden's upcoming birthday just to share a bit of happiness with you! Later this summer in a modest service with just our immediate families, Hayden will be called to the Torah to become a Bar Mitzvah. We are keeping it very small for a number of reasons.... However, we DO promise there will be video, pictures, etc to share!"

Around the same time I also proactively created our annual National Fragile X Foundation (NFXF) fundraising page. As Hayden's mitzvah project we want to show our support for the fragile x community while honoring Hayden's milestone at the same time. The number of participants is also especially meaningful, separate from our fundraising goal, to support the NFXF while increasing fragile x awareness, too!
All are invited to visit the 2018 link at give.fragilex.org/Hmitzvah
Sharing is equally important but for anyone who wishes to contribute, we suggest $13 for his birthday or $18 which symbolizes chai in Hebrew, and good luck (pronounced like challah, not like chai tea).

We say many thank yous throughout each year but we don't want the frequency to lessen the sentiment. Because the reality is that fragile x may not be a thing of the past any time too soon, but neither will our determination. So this has truly been our privilege year after year and we continue to feel honored for all of the support. Everyone has, in some way, contributed to our son's smile... 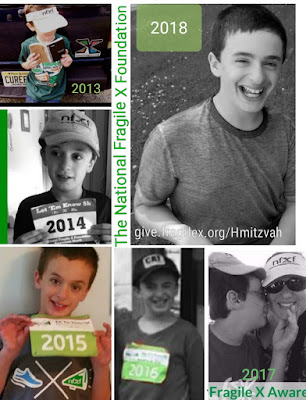 ... certainly not excluding the Foundation. The NFXF is synonymous with awareness, education, advocacy and research. We all need support and sometimes day-to-day guidance, but we also need to think ahead. The NFXF demonstrates emphasis in all areas, and I like to think of every one of these as another reason why I became a volunteer.

We are grateful and we are fortunate because there are many incredible organizations supporting the fragile x community, around the globe. Among the most well known is the NFXF-- unparalleled in their comprehensive philosophy of supporting families in-the-now as well as moving forward. The knowledge we've gained and the connections we've made provide a constant sense of pride, sometimes relief and always hope. Similar to watching Hayden grow up.

So for the bar mitzvah process, this began with a thorough conversation with the rabbi over the phone and then a meeting with me and my father. The first introduction with Hayden was after school one day. I told him we were going to Grandma Suzi & Pop Z's house (in Totowa) and then meeting dad so we could all go see the rabbi together.

Side note (with a smile)... Hayden is verbal-- he began speaking after he turned five. His communication is constantly progressing and most people can understand most of what he is saying, especially in the context. However something new we recently learned, is that his pronunciation of rabbi sounds much more like "rib eye". So when he was recapping the plan to Dan, I got a good laugh when my husband questioned why we would be going all the way to Totowa for steak-- which first of all I don't even eat and unlikely H would either-- furthermore on a random school night which would not make sense. So I guess technically step one was practicing "raaa-bye".

Step two, Hayden began practicing wearing a yarmulke. (If anyone is so inclined, click on the highlighted word yarmulke and a link will open in a separate tab, where you can read the explanation of this Jewish headcovering. Same thing for other highlighted words ahead...) 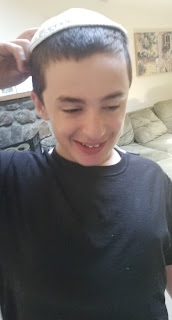 Hayden has been to two family bar mitzvahs so he does have some point of reference, but we have to start simple with him because he also never went to Hebrew school.

Step three... visuals. Hayden made some interesting expressions looking at my-- and Jenna's-- b'not mitzvah album that my parents purposely put out that day after school.

Step three... meeting the rabbi and having a mini first lesson. He was wonderful with Hayden and has an easy going sense of humor. Here is a photo after the opening of the ark when he was showing Hayden the torah(s).
And yes my son had to match Pop Z for the occasion (as he does for most occasions that aren't even occasions).

Step four, Hayden's next lesson with the rabbi. Incredibly proud that he tried on the tefillin! My dad has his own set from childhood, and for Hayden we are borrowing kosher tefillin that my cousin's older son wore when he was bar mitzvahed. The tallis he'll be wearing on the day of will be one of the tallit that my dad has-- either his from when he was bar mitzvahed or my late grandfather's (who Hayden is named for). In the photo below he is wearing a tallis from the shul.

Sidebar about my late grandfather... he was one of the founders of the synagogue that our family belonged to while I was growing up (and needless to say the same one that my father's family went to). While it would have been very symbolic for Hayden to become a bar mitzvah in the same exact shul where other generations of Zamelskys were bar mitzvahed (myself included), long story short we were not able to make that happen. But-- blessing in disguise-- stepping up to the bimah in that particular layout and with such a congregation of that size, may have been overwhelming for Hayden. This is a much more intimate setting and I hope... most comfortable for him. 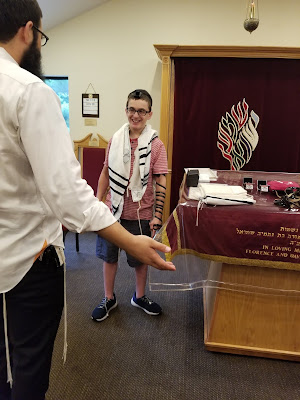 At the end of  the lesson they removed the smallest (and least heavy) of the torahs from the ark so he could practice holding it. Hayden hesitated which makes sense but they'll try again next time. Overall he did really well! Exceptionally well. 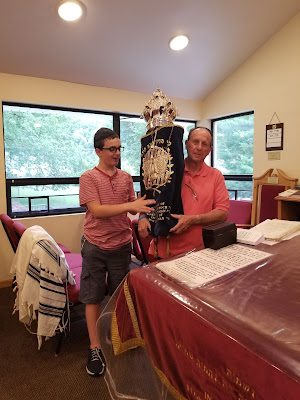 My simple hope is when the official day comes on that Sunday in August-- (instead of having steaks at my parent's house--) Hayden will be at ease and follow through.
Fingers crossed with an x.
In the interim, stay tuned...

Special thank you to the moms who answered so many questions for me-- texts, emails, sometimes lengthy phone conversations, etc. Would not have been able to accomplish this with you.
And to Kira, I am particularly grateful.