First, Hayden earned another Random Act of Kindness Award for helping a classmate in the special ed room :) 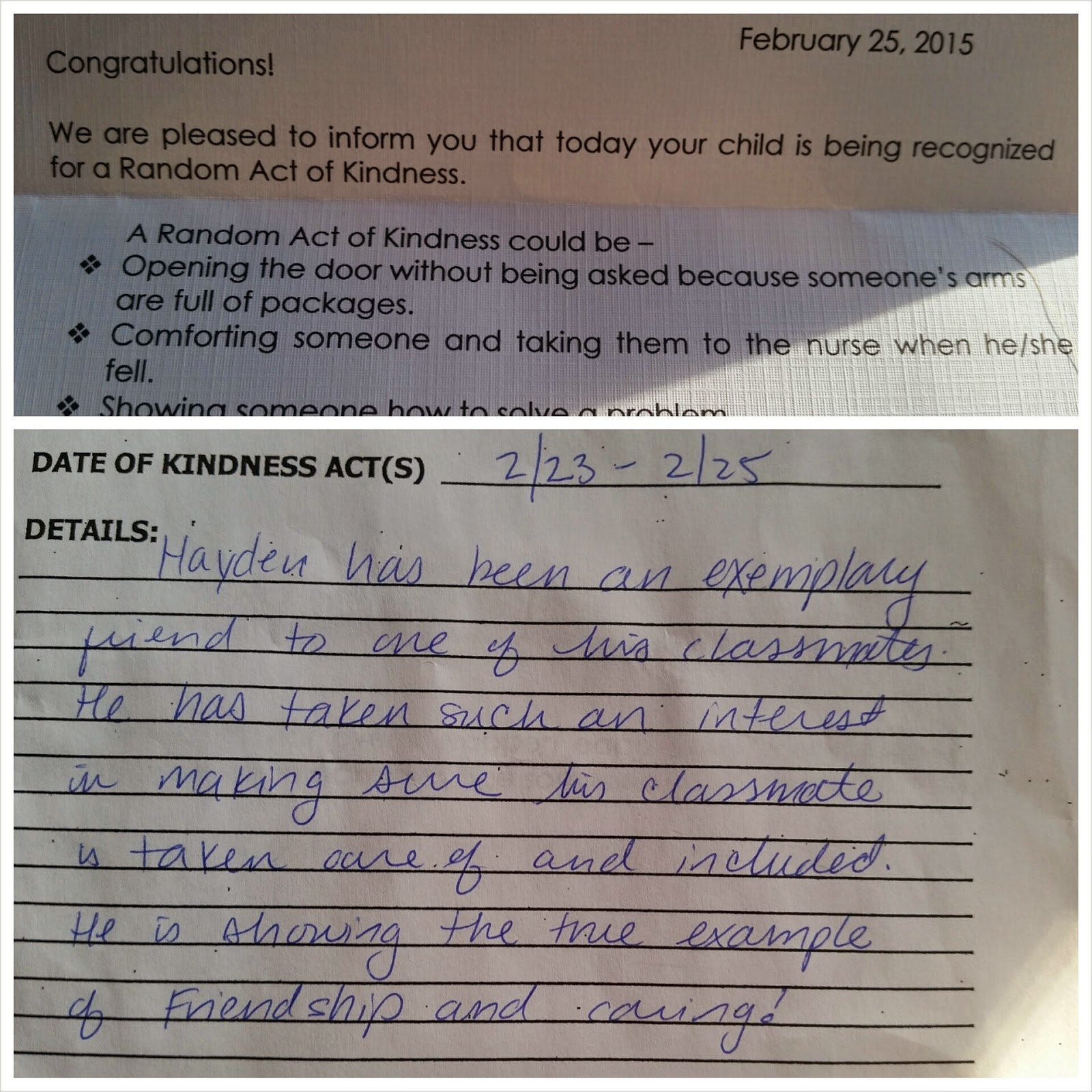 The second one needs a little bit of explanation but here goes...

So, in our world many things are a measure of progress, including scribble. Which is exactly what the picture below probably looks like to most people. However on February 25th Hayden wrote the first three letters of his name, for the very first time. Although they do not appear to be in the correct order on the page, they actually ended up that way simply because he fit them wherever there was room. But he did appropriately write the "H" first & then the "a" & then the "y".

You have to see through some extra marks but if you look at the picture without staring too intently... notice the "H" is to the far right (it's sort of crooked)... the "a" is near the center (looks like a lowercase "e" in script, but he drew the round part & then deliberately added a line to the right of the circle)... & the "y" is on the left: 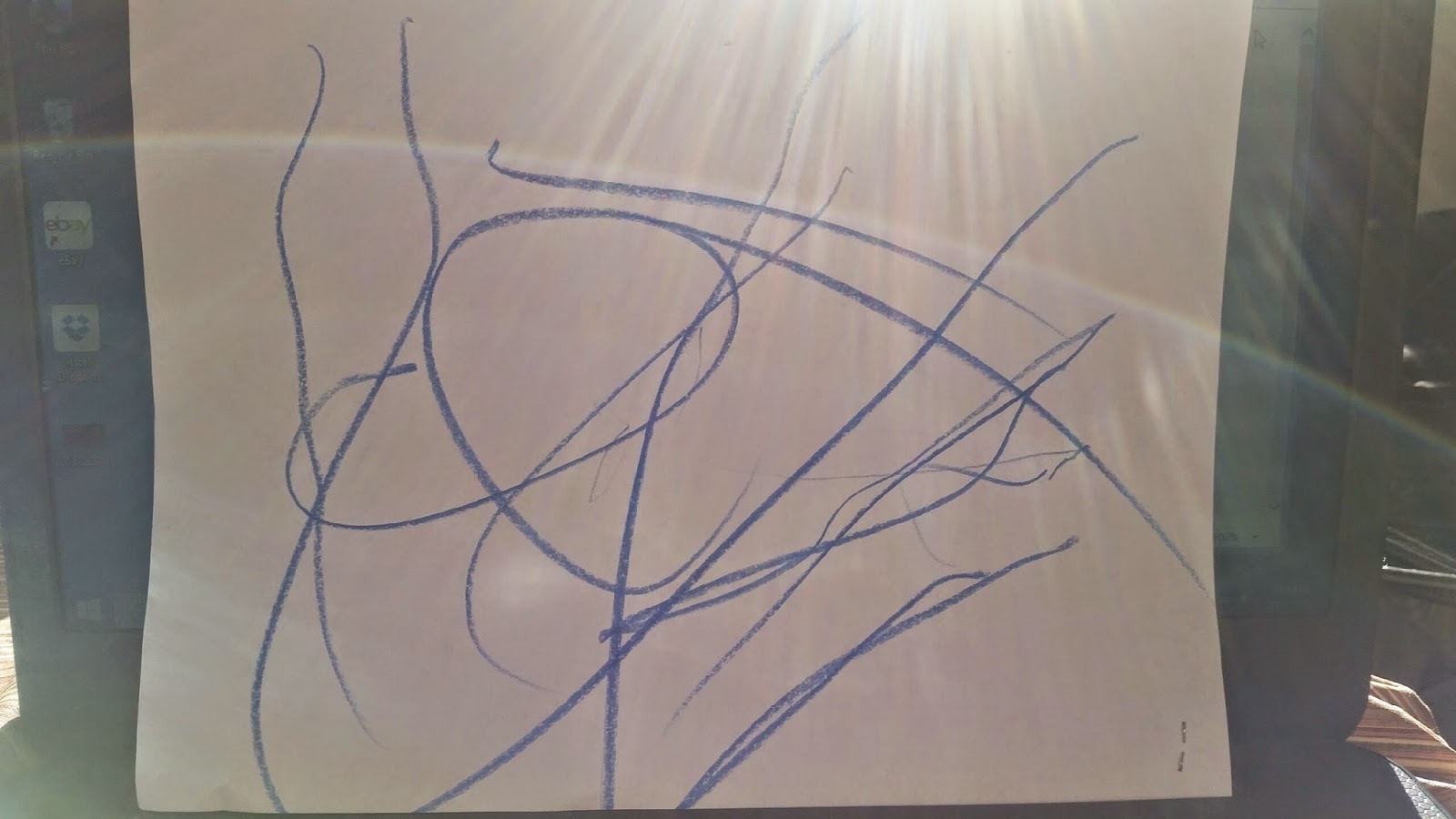 Here they are separated out, in the correct order: 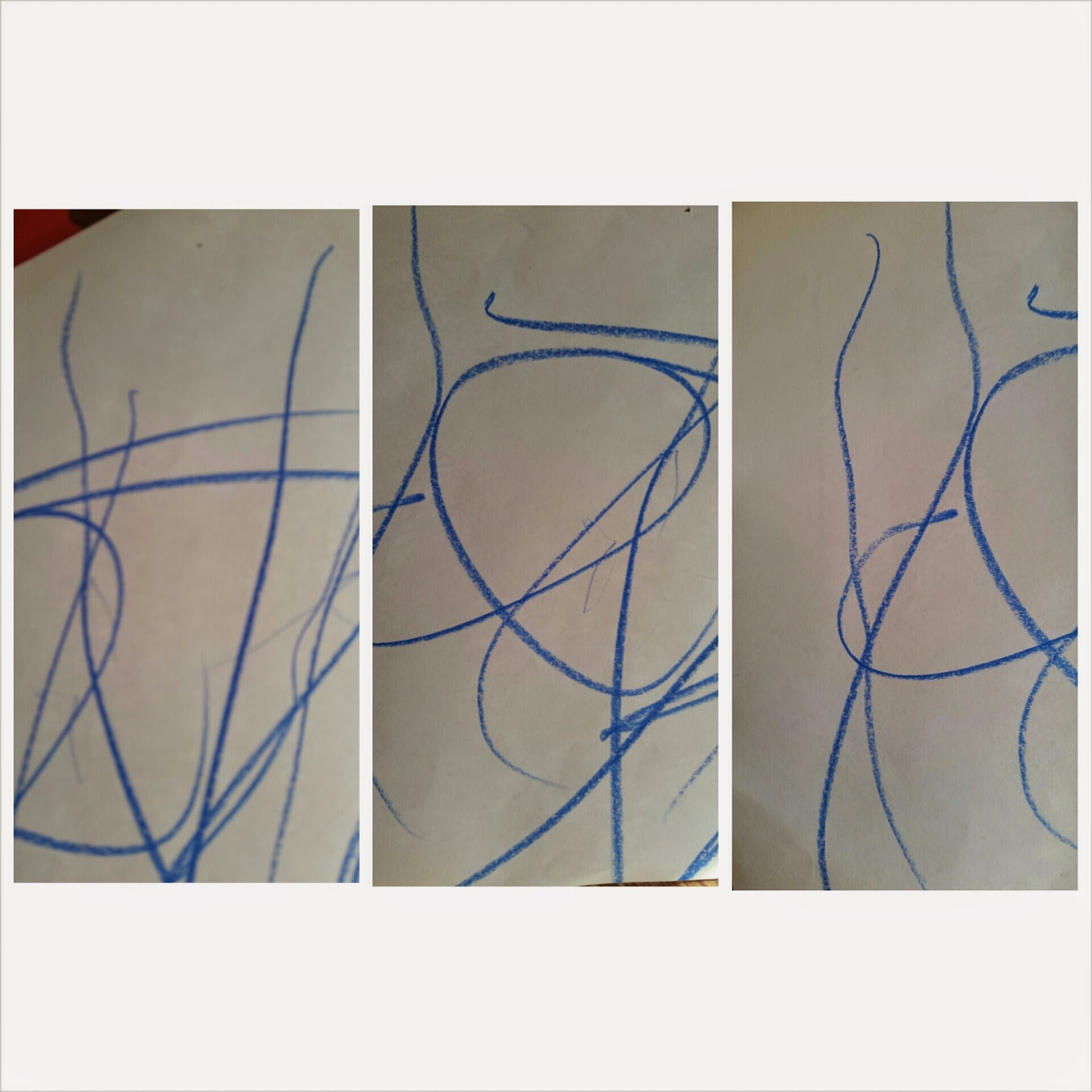 That is hands-down the most amazing thing I have seen in a long time. Difficult for me to express my pride in words.

During today's progress meeting at school the teacher mentioned that one day just a couple of weeks ago, a buddy at school brought H something from another classroom. One of the aides or the teacher who was with Hayden at the time said, "Why don't you invite (the buddy) to see your classroom?"

Hayden is with Gen Ed peers too, but the context here was that he was walking back into the Special Ed room.

Well, as Hayden & his buddy entered the classroom H said very matter-of-fact (apparently):
"Things are a little different in here."

The other child was more than fine with this, which is wonderfully amazing in itself, but what I'm talking about is the amount of incredibleness that is squished into that single statement...

"Things are a little different in here"

... not to mention the maturity & appropriateness of what Hayden said... & the timing... & the fact that he is becoming self-aware enough to notice this... & most importantly... that he just wanted to help the other student understand.

I don't mind admitting that hearing this was the first time I nearly cried at a progress meeting. Welling eyes further encouraged by learning that Hayden's schedule is once again being refined, to increase his participation in the Gen Ed setting with same-age peers. Thanks to technology combined with Hayden's ever-improving speech, his academic progression is clearly evident. And socially I am beyond grateful for the kind, patient, & understanding kids... like his buddy who enjoyed the tour of Hayden's other classroom & is completely accepting of things being a little different in there.

Next week by the way is the National Fragile X Foundation's annual Advocacy Day. Constituents from around the country travel to Washington, DC & attend meetings with their Members of Congress. (I strongly encourage you to learn more.) Not that I ever need extra motivation to attend Advocacy Day to share our story with legislatures, along with many other awesome constituents from the fragile x community, but if I did... this not-so-little update on Hayden's progress would just about push me the rest of the way to Capitol Hill.

a knock at the door

Many parents within the fragile x community have truly incredible blogs. Reading some of them is almost as compelling as watching a show you're hooked on, only they're not acting.

A couple of friends recently shared blog posts which stirred familiar thoughts in me. And furthermore, relatable challenges which have been on the forefront of my mind lately (funny how that happens).


Holly is a mom of two from Illinois, & here is her most recent update :)
Cindi is also a mom of two & she is from Colorado. This is her latest blog post :)


While one is a present challenge & another is a recollection from the past, both experiences are insightful, educational, & brave. I would encourage anyone to read them. Their words help shape assumptions into understanding.

I was going to discuss that it's no surprise how maintaining schedules & adhering to routine are definitely near the top of the list of priorities for most kids with fragile x syndrome. I have been working on this blog post on & off for a couple of weeks now (literally). Partly revising the draft because there are so many different points I wish to emphasize, & partly just a side effect of recent computer issues. But one thing rings predominantly true-- that many of the challenges we have, carry over to aspects of life that I wouldn't have expected them to.

Most of the time the routine of the day is mutually comforting because we all know it works. But that being said, there is not any one approach that will always be successful for any one challenge. It may depend on the day, the hour, the mood, the environment... as with any person.

Possibly amplified with a child who has fragile x.

But after an occurrence from just last night, I have one incident in particular that I wish to share. This happened to someone we know-- for real, not in quotations-- but the family experienced a situation that COULD happen to any one of us.

With respect to privacy I am not going to specify friend, relative, near, or far-- but I will say, it's a family with two children. I won't even mention son, daughter, both of one, or one of each. I will only tell you that the younger child is Hayden's age, has autism, but is high functioning. The older sibling is in middle school & has some behavioral challenges.

It was that sibling who happened to have a behavior episode at home last night, & long story short around 7- 7:30PM the family was startled by sudden, strong knocks at their door. A male voice exclaimed, "This is the police." The homeowners responded immediately & found two officers standing on their doorstep.

Dan & I have often admitted amongst ourselves that if anyone ever heard what goes on in our house when we are trying to trim Hayden's nails, one might suspect a murder scene. I don't believe we would ever be able to live in any type of building that has a shared wall (or walls) with others. And that's just nail trimming-- which by the way when we're done, is like an off-switch. H simply returns to a completely unphased state, immediately after the last clip of the clippers. I don't even want to help you imagine what it's like when he has a meltdown over something less controlled.

What ultimately happened with this family with the two children, is that someone down the street from them called for help because they suspected a domestic violence dispute-- this is as much as the police told them.

We should all be so lucky to live near at least one person who wouldn't ignore unusual signs or signs of a struggle. At the same time it's very difficult to be thankful for such neighbors during this type of instance-- who were hopefully just concerned & not disguising a noise complaint.

The officers were kind & understanding, but the humiliation & invasion of privacy during a vulnerable moment will leave its mark. The mom said the scene the officers walked into, was similar to something on a reality cop show-- one child reeling from their meltdown & the other running around in nothing but underwear, with two devastated & drained parents at arm's length.

But this is why I insist on talking about difficult subjects-- not only because sometimes we need to see both sides to gain a better understanding, but also because the only thing worse than our absolute toughest days would be feeling as if we're going through them alone.

Please keep the conversation going. And when appropriate please offer support, or even just an ear, to those who need it.

A tad different hearing a knock at the door & seeing a friend on the other side.