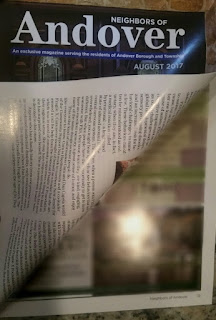 Our local area has a new magazine that is only a few issues young, and by chance I happened to meet the publisher a couple of months ago. Long story short our guy, along with his dog and a very nice spotlight on fragile x, are featured in the latest issue! 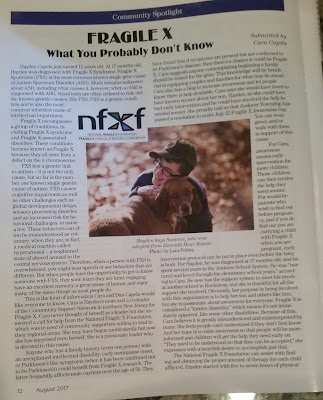 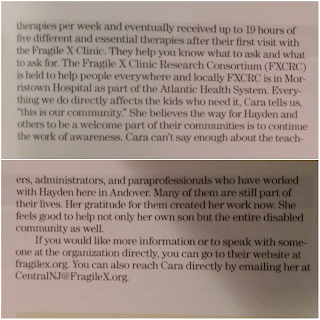 I was so enthusiastic about the prospect-- even though we did not desire to be on the cover-- that I feel as if I nearly overloaded their content coordinator with information for the article. So naturally I am sharing this blog post to accompany the magazine coverage for context, as well as clarification. But needless to say we hold a depth of gratitude for the inclusion in their publication!

As the article mentions I do have a role within the National Fragile X Foundation (NFXF)...
The Community Support Network (CSN) is comprised of parent volunteers from all over the United States, within seven regions. Each region has their own groups and I am the co-leader for the New Jersey Fragile X Community Support Group. Our group includes the entire state of New Jersey and is not just specific to any one area. Paula Fasciano, my mentor and counterpart, is also the Northeast Regional Leader for the CSN as well as a Board member of the NFXF. It is true I was somewhat reluctant when she initially reached out (approximately four or five years ago), but I simultaneously wanted to help very much. So I sort of jumped in with both feet and my hands together and that's how my involvement began.

As per the article Hayden was diagnosed at 17 months. At that point we already initiated the process to get evaluated for Early Intervention (EI) services, but it is very unfortunate that he missed out on nearly a year and a half prior to that... simply because we did not yet know about fragile x. We knew he needed help, but we did not yet know "why". This is further frustrating when you consider the fact that children age out of EI when they turn 3. I believe initially Hayden qualified for about seven hours of therapy per week, across four different therapy areas. After our first fx clinic visit, we were armed with a much better understanding of what he would need and how to advocate for the appropriate services. Our efforts ultimately secured 19 hours of therapy per week, across five different therapy areas. Without the support of the fragile x clinic, we would not have known what the appropriate goal would be.

The Fragile X Clinical & Research Consortium (FXCRC), also mentioned in the article, is the larger umbrella that all of the fx clinics are under. There are two clinics in New York and the one on Staten Island is the original one we went to. Some of their experts have been consistent pillars of support to the entire fx community for many decades. In recent years the first fx clinic in the state of NJ was finally established as well, and they are within Atlantic Health System (AHS) in Morristown. In an effort to help make this happen, during an appointment with one of Hayden's specialists, I bridged the initial communication between the NFXF and AHS. Eventually through the perseverance of many others AHS became a part of the FXCRC. (Side note: we were thrilled when Newton Hospital became part of the same network, as Dan has actually been with AHS since before Hayden was born.)

While Hayden is receiving the support he needs at a different school now, I am definitely grateful for all of the people who loved and nurtured Hayden throughout his elementary school years. That being said I still wouldn't limit my gratitude towards them for what I do now. Hayden is definitely the primary driver of that.

We hope that you take a few minutes to read the article! We would also love to see social media pics of our friends and family wearing green on Saturday, to show support on National Fragile X Awareness Day! And yes it is true July 22nd is an officially recognized date right in our own town as well!

--
For anyone local who finds their way to this blog post, but who does not personally know Hayden, here's a little blurb that they ran out of room for with all of the content they were squeezing into that article!
Hayden has always been an engaging child. He loves spending time with people closest to him and his interests include cars, tools, trucks, fixing things, helping others, as well as spending time on the water or being outside in general. He loves to wrestle with his dad, take his dog Sammie for walks, or work on projects with his Pop Z. He started speaking after the age of five and has barely stopped talking since. He likes to wear baseball hats and faux glasses but like I always say his most prominent feature is definitely his smile.
--
Posted by Cara at 4:44 PM 2 comments: