This picture was taken just before 11AM on Friday. Hayden was dressed for school, he was not sick, & he was not supposed to be home. But there he was hand-to-paw with Sammie in the aftermath of another one of life's unexpected moments... when that powerful fragile x gene had a temporary takeover of his mind & his body. I didn't see this one coming. 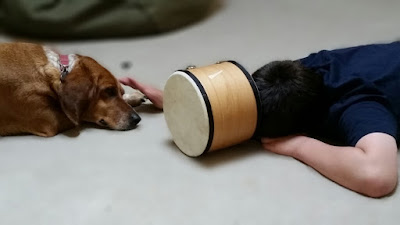 Before he switched schools one of the many factors I was so heartbroken over was how many moments he missed with the peers he had been growing up alongside. He missed the class picture at the beginning of this school year because apparently they couldn't get him to join the other students. That was a first & I was sad for him but I of course didn't let him know. When his individual school pictures came back I simply hid the class photo so he wouldn't be reminded. I think I mentioned that in an earlier post but also around that time we missed the PTA Mother-Son Luau, & at some point a Father-Son event, & unfortunately the winter concert too. This weighed heavily on my heart because during elementary school it took us years to help him be comfortable enough to stand on the risers with his classmates. And when he did he was so happy & having so much fun. To this day he still enjoys watching some of the short video clips I captured over the years.

There are other examples but basically Hayden just didn't seem comfortable in his own skin after he started middle school. I know a lot of other kids were having difficulty adjusting as well, but we also know that most of what Hayden feels will often be even more heightened. I remember talking to some of the other moms in the fragile x community, & trying to understand if what we were experiencing with Hayden was typical of these kids when they reach a certain age. Although, during the weekends Hayden was for the most part his usual self. It was a very confusing & trying time for us.

Even though enrolling him in a different school is not something we ever could have expected doing one day, from the get-go it has seemed like the right fit. Every administrator, faculty, & staff member we've met are fantastic. They've never spoken to us as if they were trying to sell us on anything. Every conversation has carried a "how can we help you & help Hayden" sort of tone & they are grateful-- not like it's their "job". They have never sounded like politicians, they have never spoken to us in any way that felt scripted, & at the same time they never have to hesitate before answering any of our questions. They specialize in working with special kids & what can I say... it shows. Everyone in that school building seems genuinely inviting & happy to be there. The aura is comfortable & it is contagious.

Fast-forward to last Friday & I was so excited for Hayden for his next class trip. Even in the short time Hayden has been a student there, he has already done so much! And there is still a lot more planned. It has been wonderful (& such a relief) to once again see him participate in various field trips & school events. I knew he would enjoy Friday's trip, too-- they were going to a farm & my biggest worry was remembering bug spray because he seems to get bit by everything this time of year.

Friday morning came & he woke up happy & our day started similar to how it always does. He left the house in a new outfit, his backpack all set for the day trip, & a smile on his face! We were literally about to pull out of the driveway but it sounded like Hayden's door didn't close all the way. So I asked him to open it & close it again & he started to... he opened it... & then that was it. I lost him (as we say).

After a very long half hour of trying every trick in the book-- including calling the school & having his bubbly-personality teacher get on the phone-- he still would not get all the way back in the car & close the door & put his seat belt on. It eventually got late enough that we would never even make it in time for him to leave with his class. We simply live too far away from the school.

It was a sickening feeling to shut the engine & remove my keys from the ignition. But there my truck sat, quiet, in the middle of the driveway several feet back from where it would normally be parked. We were defeated & fragile x won.

The weather was absolutely beautiful. The two days prior had been humid but Friday was much nicer. At the same time those clear, sunny skies only made the situation even worse. No rain, he wasn't sick, he was all ready to go... & then suddenly we were stuck.

The fact is due to simple logistics he is increasingly disconnected from the only community he has ever known. At the same time he is not fully integrated with the new one. So it's sort of this in between limbo. I do think it is the right environment for him, I know we made the best decision we could have given the circumstances... but it's not local & it's not home. So there are some things about his new placement that are not ideal. Hayden had previously been surrounded by children who he knew. And who knew him from way back in preschool & kindergarten. And every year since first grade I spoke to his classmates about fragile x. I volunteer at PTA events, I have been part of the Education Foundation, & I have given every effort (& then some) to build Hayden a very strong support system over the years in his own community. And then, spent nearly an entire school year (last year) trying to prepare him for some place where we thought he'd be for the next four.

I know I've said that before but the context is not getting much easier. The change was abrupt & it is still an adjustment.

He did enjoy the rest of our weekend & actually his new class happens to have another trip planned later this week. While I am relieved that he went off to school relatively smoothly this morning, I can only hope for the best that he doesn't miss anything more.

I was sad for Hayden on Friday & I'm guilty of not doing a very good job of hiding it that day. I hated the situation, I hated fragile x, & whether I blame it on my genes or not I too became stuck.

But I also remember Hayden starting to sort of snap-out of his state of mind before I did. And he asked me what I was doing which in many contexts is actually his way of asking "what happened". And I said, "Nothing, I'm just upset." I wasn't telling him anything he didn't already notice. So then he said something along the lines of, "I'll sing for you" or he asked "want me to sing for you"... & I was so surprised I just looked up... & within two seconds he was standing there holding an old toy guitar that we never got rid of. And he started to sing, terribly out of tune, "Mooommyyy... is so craaankyyy..." & then he started throwing in other lyrics about the dog that made no sense but sounded like it could be an Adam Sandler song.

I hope with all my heart that he-- and we-- have more of those types of moments to get stuck on instead.