if you can't carry it all, make 2 trips?

Well, we had the first progress meeting of the year this morning...

On the plus side, I learned that H finally raised his hand in class to answer a question (pretty huge, right?)... but equally awesome is that he got it correct! Unfortunately the teacher couldn't remember what it was so I will have to ask his Aide, but regardless it's pretty tremendous.

Also it was humorous to learn that when working in a smaller group, Hayden now speaks under his breath because he knows he can not call-out the answer. So for example, the speech therapist tells me that if he's working alongside another student & it's supposed to be their turn, he does this thing... he will lower his head & look to the side & whisper the word.

(If we each had a penny for every time we're torn between wanting to high-five this kid or correct him...)

On the down side, I should be beaming about all of these things but unfortunately we are still dealing with the whole transportation issue... which, absurdly long story short, here's where we are now:

There is an Aide on the van with H... met her once... her name is Maria... she rolls the "r" well when she says her name... H was very surprised to see a new face on the van as he was about to step inside... I could not give him a heads-up because I barely had one myself... & even so, I did not know male, female, name, nothing...

So I gave Maria-with-the-fancy-r one of H's Positive Student Profile brochures... & as I'm handing it to her I take a glance around the van, & suddenly realize they will now be short one seat in the afternoon...

There is one more kid who is not on the route in the morning, but he is after school.

Well, later on following H's progress meeting I learn that the van is making two routes in the afternoon... first they pick up one little girl & her Nurse/Aide & bring her home... during this time H & the other student are left behind at school & basically wait in the gym... then I am told within fifteen minutes the van returns (just in time for the school Aide's dismissal), & then it is H's turn to come home.

All this, because the transportation company does not have a vehicle which can accommodate everyone at the same time.

Or should I say, all this because suddenly after all these years Hayden needs an Aide on the way to & from school, because he just won't stay seated.

I may not know the root of his anxiety with this one, but I do know it's painfully contagious.

It seems we're still having challenges with transportation compliance this year.

I mentioned this issue a couple of posts ago, & why the option of the seat belt cover wasn't such a comforting one. I may or may not have mentioned they also tried another style where the buckle can be removed by hand but it is tough to take off... kind of like a child cap on a medicine bottle.

Well, H figured out how to remove it.

I was recently discussing the issue with the behaviorist & she of course offered the rational perspective that the rest of us seem to forget... such as, preventing H from getting out of his seat is not solving the root of the problem in the first place.

Considering the fact that I am not with Hayden when he is on his way to school, it's exceptionally challenging to figure out what is prompting him to remove the seat belt & stand up when he's not supposed to. Keeping in mind, this is a new challenge as of this school year. Furthermore, although his speech has progressed considerably over the past few years & continues to improve, the fact is Hayden still has limited communication.

Something is different & we do not know what it is, but it's obviously affecting him. So the next idea came from H's teacher in the form of a short social story-- this is a popular technique for reinforcing expectations & therefore hopefully curbing behaviors, in children with special needs. 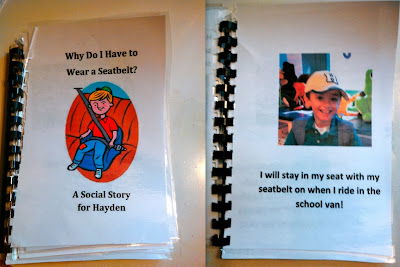 It's clear she put a lot of work into this (& managed to do so in a very short amount of time). The small book is nicely laminated, with binding, & even personalized with photos. Despite the unfortunate fact that my fidgety son had the thing half taken apart on the very first day he held it on the way home... we will continue to try & reinforce the lesson with him.

In addition to the social story, they have been thinking through other strategies as well. Today began the first trial run of reversing the morning route, so instead of H being picked up first he was picked up last. I suppose shortening the travel time to school could be helpful but it's too soon to tell. I will say this morning he was getting somewhat anxious, because he sensed when it was supposed to be time to leave & I had to continually distract him.

Next week we are having a progress meeting & I am grateful in the meantime everyone is continuing to put their heads together to help H. But last week there was one particular conversation which left me rather upset.

The Principal called to let me know that he too tried to talk to Hayden about the importance of wearing a seat belt & staying seated. Hayden-- in so many words-- communicated his dislike for the seat belt but also that he understood & he will try. Apparently he actually said he hated the seat belt, but it's important to note sometimes he uses the word "hate" when he does not really mean it.

For a number of reasons which I won't bother outlining, in my heart of hearts I do not ultimately believe that this has a damn thing to do with the seat belt. Never mind the fact that this is the 3rd new driver in less than two years, ever since the school switched bus companies to save money...

& we know how kids with fragile x just love changes.

But the part of the conversation that upset me was when the Principal mentioned it had been communicated to him, that Hayden was rude to the driver & rude to the nurse of another student.

adjective \ˈrüd\ : not having or showing concern or respect for the rights and feelings of other people : not polite

Rude is basically someone who is being a jerk. Rude, however, is not an accurate way to describe someone with intellectual disabilities.

Hayden is genuine, he is kind, he is inherently gentle, & he is actually empathetic. Every one of his behaviors has a purpose & although it might not be obvious to a teacher, therapist, behaviorist, or any other specialist... & believe it or not perhaps even to the parents... there will be times when Hayden will not be able to control his emotions or reactions... despite his very best efforts, & despite the fact that it's obvious just how much he struggles to regulate his anxiety.

The name fragile x syndrome comes from a defect on the x chromosome. This interferes with the body's ability to produce a certain kind of protein. Although this protein is not needed in most parts of our bodies, one organ that does need it is the brain. This lack of protein causes a depression of the brain, but not in the popular sense of the word. Rather this is referring to something being expressed too little, too much, or just inappropriately.

That is not the same as rude. And the worst part is that even if Hayden was just some obnoxious kid who was channeling his frustration by not wanting to stay seated on the way to school, then so the F what. That wouldn't change the fact that he is just a child & something is bothering him.

I often think it's actually the rest of the world that needs to stop, sit down, pay attention beyond the obvious, & please remain seated until they can really understand what's actually going on.