My Uncle Bruce's résumé would tell you that he held a bachelor's degree in Emergency Services Management & a master's in Safety Engineering. Before my sister & I were even born he began his career as a volunteer firefighter in New Jersey in 1972, eventually becoming a full-time firefighter paramedic in both Florida & Georgia. He would earn certifications as a firefighter, emergency medical technician & paramedic. He was also a fire instructor, EMT instructor & taught CPR. He went on to hold a position with the state of Georgia to not only teach but also develop courses in fire, rescue, & EMS. After completing an instructor course at the National Fire Academy in Maryland, he began teaching nationally part-time before moving to New York. While back in the northeast, he became the Assistant Director of Health & Safety for the New York City EMS. This also included his service as the Acting OSHA Coordinator of the Fire Department of New York. Upon retirement, he relocated back to Georgia.
What I always knew was a simpler perspective. My dad's family was also from Livingston & Pop Z grew up within walking distance from the high school-- up behind it, past the football field. Needless to say he & his siblings are all LHS alumni so my sister & I were the second generation of Zamelskys to graduate from there. But for as long as I can remember, from my uncle having lived down south for so many years, there was barely (if any) a hint of Jersey accent left in his southern drawl. "Well hello there, darlin'... how ya'all doin'?" he would say. You could even hear the twang in his laughter.
I also knew he was a chimney sweeper for I'm assuming a rather short period of time, but yes there is photographic evidence. 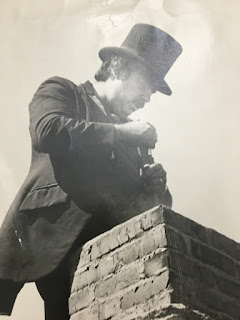 From a very young age whatever Uncle Bruce was doing you can be certain there was an interesting story attached. Like the time he was in grade school & he tried to sell yarmulkes to all the students in the cafeteria for 25 cents by telling them they should be closer to G-d when they're eating. I do remember my grandmother telling me that the stolen head caps were later returned to the synagogue so at least for that (at Temple Beth Shalom, by the way, of which my late grandfather was a founder).
I also remember my uncle having an accident with my dad's first Harley, after taking it for a ride without permission when he was visiting one time when I was a kid. (This "borrowing" of what wasn't his was somewhat of a trend when they were kids themselves. So I heard.) Anyway, he was fine but the bike wasn't as fine. But at least it was our own property damage & not someone else's... like the time he bought a big, old fishing boat. And on our first & perhaps only excursion (I'm not entirely sure), he accidentally speared another boat's windshield with the bow of his as we were leaving the marina. Yet again not a single injury because as luck would have it, the other boat was vacant.
One thing's for sure, you would never be bored or without something to chuckle over if you were in the presence of Uncle Bruce. And more often than not you can be damned sure he would learn you somethin' whether you asked or not.
He certainly had his own particulars but we sure love him & will miss him so. 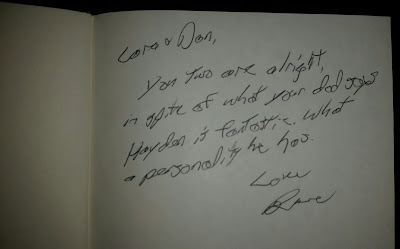 I hope wherever you are you have a bottomless glass of ice cold water just the way you like it, with savory hard salami from the very best kosher deli, & those little chocolate covered jordan crackers for a sweet treat. But most importantly that you enjoy whatever you're doing in peace... & heaven help anyone up there wearing perfume or cologne who comes within ten yards of you.

Please tell Gramma Phyllis & Poppy Shoore I love them, too. I don't know how this all works-- if they weren't expecting to see you so soon, or if they knew more than us. But either way, despite your time on earth being too short I do believe you will continue to live up there. And I promise we'll do the same down here. I know that's just what you'd want. 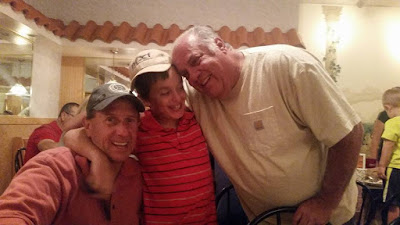