A small but mighty group of three NJ constituents attended NFXF Advocacy Day at the end of February-- and they sure made a significant difference!

New Jersey was represented by two moms and a seasoned self advocate. One of the moms recently moved out of state but advocated on behalf of NJ this year because luckily there was already good representation from her new home state. Very grateful she was able to join them!

Historically, former Rep. Greg Harper was one of the biggest champions on Capitol Hill for the fragile x community. Not only a father to a son with fxs, but also a founding member of the Fragile X Caucus. The Caucus is a group of Congress members who pursue common legislative objectives. The FX Caucus aims to:
⭐Increase awareness of public & private efforts underway, to treat patients with fx and
⭐Develop therapies and

Since retiring in January the role Harper filled as co-chair, alongside Rep. Elliot Engel (NY), had been vacant.

One of the NJ meetings on Capitol Hill was with Rep. Chris Smith, and their visit had wonderfully significant results! Together, this small but mighty group representing NJ successfully helped secure the co-chair vacancy of the Congressional Fragile X Caucus!

An added bonus to this year's Advocacy Day Event-- versus other years, when we've met with staff members from our legislator's office-- turned into this: 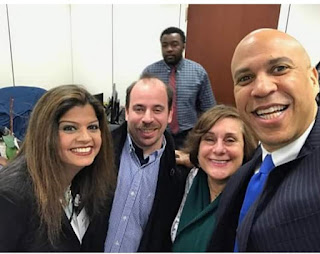 I can't really top that but I will say, fast forward to April, & I attended the NFXF Leadership Summit in Orlando. The meetings took place at the location of the upcoming 2020 International FX Conference. While there was a much smaller number of Chapter Leaders in attendance versus previous years, it was as always powerfully motivating to be together. And if you look carefully you'll notice the guest speaker-- the tall gentleman in the suit, on the end of the back row of the photograph-- former Congressman Harper. 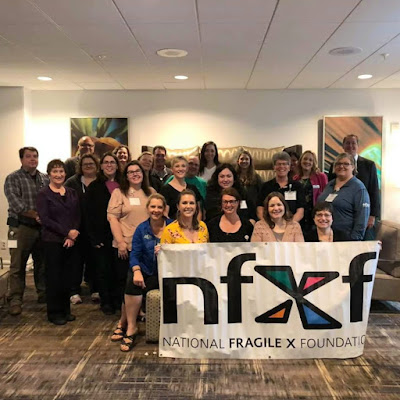 On the heels of a personally trying winter for my family, as Dan & I were faced with the very unexpected curveball of his position being eliminated at his employer of roughly 14 years-- following the last couple of years having been promoted to a manager role-- my trip to Orlando felt like a reboot even despite my usual travel anxiety.

Little did I know it was only the calm before an even bigger storm. Now that Fragile X Awareness Month has begun, I am going to share about our latest challenge with Hayden. I've decided that in the interest of maintaining control over what is shared, when it's shared & how it's shared... it's a perspective that I want to come from me and no one else. But it is also an incredible example of why the structure of the NFXF is so crucial for appropriately supporting our loved ones living with fragile x. Reaching far beyond research to ensure there is adequate awareness, education, advocacy and resources to not only help us through daily challenges... but guide us moving forward.