I wrote a poem about my dad in one of my first writing courses at college, in the fall of my freshman year. Titled Invincible, it was three pages of surreal situations (accidents, injuries, and close calls) that he has lived though. Beginning at three years old when he had scarlet fever and chicken pox at the same time, and in the same year fell out of a two-story window and landed on concrete... through a whole host of other stories I covered that had happened up until the time that I wrote the poem in 1994.
The stories haven't ceased even now, but we're all beyond grateful they're much, much fewer. He has always been one to do a lot, so a lot happens.

Probably when people think of my dad they remember the boats over the years-- most friends and family enjoyed time on them with us. Some of our childhood friends may even remember the Austin-Healey or the Triumph TR6... possibly not by name, but the little red sports cars. Most know about the scrap metal business, and also that scrap metal goes way back in the Zamelsky family (even though my dad's wasn't technically the same exact business of my great grandfather and grandfather).

But it's the stuff you wouldn't see on paper (so to speak) that makes it really cool to have him for a dad. And he had the hair to go with it, by the way-- he would literally stand in front of the stove in the morning and let the steam from the tea kettle perfectly curl it. Hilarious but also awesome. He played the part-- when I was growing up he was like a guy in a movie who didn't need a stunt double. He could walk on his hands across the family room, he could barefoot water ski, he could slalom snow ski, he had motorcycles, he participated in the parent team of my high school jello wrestling event when I was a senior... and honestly the list goes on. I thought it was awesome that a candid from that day ended up in my senior yearbook, especially since he actually graduated from the same high school about thirty years prior.

We had a set of Britannica's at home but most of the time we could just ask my dad and he would have an accurate answer... about whatever it was. And I don't know that MacGyver ever impressed me much having Barry for a father. But I was often amazed how much math he could do in his head, and at the same time know some of the most random, rarely used words and how to spell them correctly.  That one still gets me.

Jenna and I never had a curfew because our friends had them so I think our dad just didn't see the point. When I was seventeen I got drunk at my friend's boyfriend's party and at the end of the night I didn't have a ride home so we had to call my dad to come pick me up. I remember him driving pretty fast on the way home and threatening me if I vomited a single drop in the car. The way that MR2 could handle those turns wasn't helping anything and he knew it. He also gave me Alka Seltzer when we got home and knew exactly what that would do to me, too. But the following morning after I woke up, was what really struck me the most. Not the hangover. But that fact that he came into my room, sat on my bed, and thanked me for calling him the night before.

At some point around the time that Dan and I got engaged my father told me he was getting my car serviced. It was a good car, there wasn't anything wrong with it-- maybe he said he was putting snow tires on it. I don't remember but it was the end of November so I would've believed it. Anyway, when we went to the house and he gave me my keys back he said, "a new start for your new start." I was so confused because I looked in my hand and that was definitely my keys but there was an extra remote on the key ring. He had a remote starter installed as a surprise.

He gave the most epic speech on my wedding day and then addressed Dan, and also fooled 200 guests, into thinking he was literally giving us the keys to a new home. I remember rolling my eyes as the entire ballroom gasped, Dan laughed, and then my dad said something along the lines of, "I'd like to but I can't" (cue the band hitting a couple of drum beats followed by a loud tap to a cymbal). He continued, "but what I can do is give you the most precious gift we could offer, our daughter's hand in marriage." He did however surprise me for real when it was time for our father-daughter dance, and he had the band sing an oldies song that he re-wrote the lyrics to... to make it about me getting married.

I knew I wouldn't stop calling him for everything under the sun even though I now had a husband. And I love that before long, this habit rubbed off on Dan too. Of course now Hayden video calls Pop Z nonstop from his iPad. I guess the habit is passed on from one generation to the next! Although Hayden has everyone else in the family beat by a longshot because he practically stalks my dad. Pop Z isn't too bothered by it but they leave me out of it-- for example if my parents show up on a Saturday or Sunday afternoon and I didn't know they were coming because Hayden made plans with my dad.

Jenna and I had a wonderful relationship with all of our grandparents. They were so loving and involved from the time we were born. But the bond Hayden has with my dad is on another level. I don't know what it is-- they have had an indescribable connection from the beginning. They're always twinning, or working on little projects together... or both. If we're ever somewhere and Dan and I can't find Hayden, or my mom can't find my dad, we figure out where one is and we'll find them both. Hayden was the first grandchild and initially when I became a parent, my dad was expecting he would sort of have to take a step back. He often comments how his relationship with Hayden is so much more than even the best he could've hoped for.

75 is quite a special number. A milestone birthday at three quarters of a Century. Also the year I was born (ha). And probably the number of times a day that Hayden calls Pop Z.

To the guy who gave Jenna and I our awesome curls... and would tell people when we were growing up not to mess with his Harley or his girls...
To the guy who literally always thinks of others first... and makes the toughest times seem not so bad when they'd otherwise feel like the worst...
I hope each year continues to be balanced with tons of happy memories, a little craziness, and plenty of fun... and may 75 just be the beginning of more wonderful chapters to come. 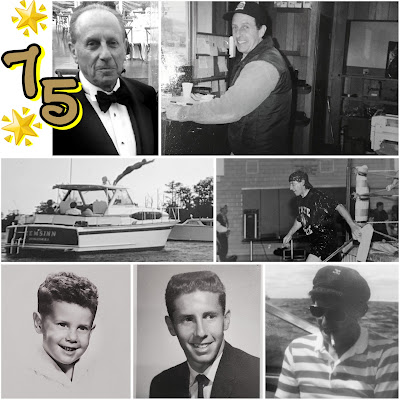