Now that the students are about four weeks into the new school year-- settled but not too settled-- I felt it was an appropriate time to have my 2nd annual FX chat with H's classmates.

The case manager cleared a date & time with H's teacher, & it was set. Last year I brought a fire truck with me (thank you Holly for the idea if you see this), & focused on "different" still being fun. So for example, you might look at the fire truck & expect all of those siren noises & flashing lights... but if you take the batteries out it is still a truck & it is still fun to play with.

I also talked about how Hayden might notice very small details & also get distracted by little noises, or certain smells, & so forth... kind of like "Spidey" senses (I forget which mom to thank for this one— possibly Melissa? :) thank you...)

It was not only a great class last year because there were so many kids in the same room who knew H from kindergarten (just the luck of the draw), but also because they happened to be a very friendly, accepting, outgoing bunch of kids. One girl raised her hand to explain that her grandma can't always hear her, & another boy said he saw applesauce on Hayden's shirt. But the reason why these things are important, are because they just know Hayden to be Hayden & he's not (at all) some kid who is different to them. Like his speech therapist said, if their take-away is that he's messy then that's pretty fantastic. She is right because of all the things they could notice, well...

That brings me to my topic of focus for this year.

I wanted to discuss certain things we can't see, & things they have in common. I opened the discussion by talking about a person on crutches... I said if we saw a person on crutches, we would understand why they have a tough time walking. But what if we saw someone with a limp & they didn't have crutches, then we couldn't tell just by looking at them why they might be limping. So a little girl raised her hand & said that maybe the person hurt their foot.

I said Hayden has something that we can't see either. This is important to bring up, because by this age I’m thinking they no doubt notice something is different. But it must be confusing as hell to understand what it is... he looks just like them, but there are definitely characteristics of H which are unexpected.

I told them Hayden has something called Fragile X but he's not sick, & no one can catch it because it's not like a cold. It's just something he was born with but he's still a happy, healthy kid just like them.

Then I asked if they've noticed anything different about Hayden, but I also offered to go first (I don't think it's easy to raise your hand in response to a question like that). So I said they've probably noticed that Hayden's words sound different, but it's not because there's anything different about his mouth. I went on to say that some kids learn things very fast & some kids learn the same things, later. Each of us can do stuff when we're ready, but not before (thank you Franklin the turtle!)

The same little girl raised her hand again but she paused for a bit, so I smiled & told her it's OK & the teacher encouraged her to speak as well. So she finally said something about... still trying to figure out what he is saying most of the time. I nodded & agreed with her, & said it's great that she tries to listen. Then I added that maybe they've noticed sometimes he is very active & moving a lot. But again, this is not because there's anything different about his arms or legs.

However, Hayden might either be excited over something or just ready for something to be finished... but either way, waiting can make him jumpy. Then I asked them what are some things they like to do at school, & nearly every answer had to do with working together, or playing at recess, but overall being with their friends.

I reiterated how much Hayden likes seeing all of them every day, & that he also likes when other people are happy to see him too.

Then I asked them what are some things they like to do at home when they're playing outside, & many kids raised their hand & said they like playing with their neighbors. Hayden knows some of the kids in our neighborhood, too, so I said he likes that as well. One kid said his neighbor has a trampoline in their yard, & I said those are great & Hayden has one, too!

There was not one thing that anyone said, which I couldn't follow up with "Hayden likes that too" or "Hayden does that too"...

So then I asked them what are some things they like to do at home when they're not outside, & many kids raised their hand & said TV, movies, video games, & one girl said playing cards. So I said that Hayden likes watching TV too, & although he doesn't play video games he does like to play on his iPad.

In this year's talk as well as last year's, I told them that Hayden not only learns from his teachers but also he learns from them when they make good choices (another nod to a fellow FX parent). And that even when it seems like he's not looking at them the same way we look at each other, he is still listening & paying attention.

I also brought the book with me again, "Special People, Special Ways", & this year the kids commented on its rhyming message which they seemed to enjoy.

Last year I handed out stickers when I was done, but this year I had them wrapped in little cello tubes with a Halloween pencil. And once again I asked the teacher to send my flyer home in the student's folders: 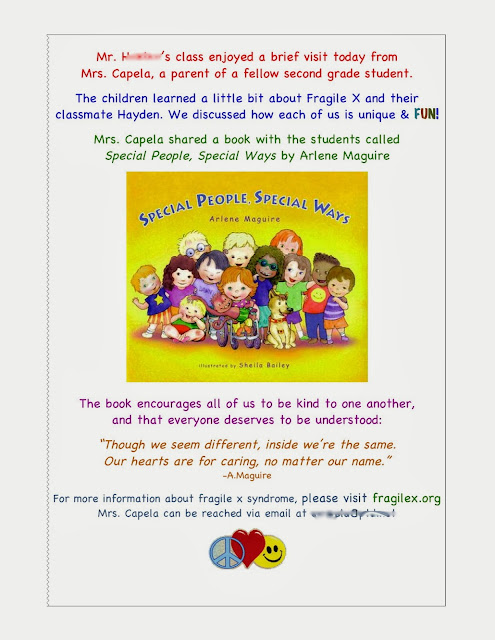 Next year is 3rd grade & all (gulp) so I’m thinking my little chat will really be discussion-driven at that point. Ideally the kids will almost take over for me as the years go on. All I know is that when I was a kid if someone was different we were rarely, if ever, told why. I don’t remember being encouraged to include others. It saddens me to think that we often kept our distance simply because no one told us otherwise. I never want a kid to look at H & be confused, although I know that’s a tough one to prevent… but at the very least I want them to know (1) it’s OK to interact with him, (2) they should interact with him  & (3) let them get to know him, so they know how to interact with him.


It is true you can not just catch fragile X like a cold, but it wouldn't be so terrible if some of the characteristics were actually contagious... such as the fact that H does not judge others & he assumes the best in them.

Which is exactly what he deserves in return. Maybe that's really all I need to say.